Where Religions Meet: The Intersection of Religious Thought

Where Religions Meet: The Intersection of Religious Thought
by Milica Bojovic
July 30, 2021

Religion is a development and an understanding that is very unique to human nature. For as long as humans have made settlements and began forming societies, they also were clearly capable of religious thought and acts of faith, which is evident in the physical places of worship they have built from the Megalithic Temples of Malta and Stonehenge in England to modern places of worship. Over time, just as human tribes and cultures diversified, there was also a diversification in their understanding of spiritual concepts so religion also took on different forms and practices. One could even argue that, given everyone enters their personal relationship with the spiritual, religious thought is as diverse as the number of humans on Earth. However, no matter the divergence in customs, practices, words uttered in prayer, position of the body, and differences in religious expression, the very essence and origin of all religious thought is traced to the same premise of compassion and understanding for the surrounding world, nature, and fellow human beings. Given the shared roots that influence the cultivation of religious thought, it is no wonder that today’s most widely-practiced religions, such as Hinduism, Judaism, Christianity, and Islam, are all based on the thread of love, compassion, understanding, and tolerance for all creation. Disregarding this gives space to unethical and immoral practices, contrary to the essence of religious belief, such as the wish to insult and hurt, which are essentially universally condemned through the very essence of religious thought.

Unfortunately, people continue to focus predominantly on differences and forget to recognize similarities and connections that are inherent to human cultures and religions. Both religious practitioners and non-religious, secular organizations are quick to conclude that religion is a source of difference and that an individual must either fully commit to a religious identity or establish distance to live peacefully. Divisive rhetoric often ends up prevailing and perverting shared reality. Hence, historical accounts of peaceful, even collaborative, religious interactions are often forgotten. One example is the moment in which Prophet Muhammad invited a group of Christians to pray in his mosque. Another is Caliph Ali writing to his governor in Egypt that “all those there are your brothers of faith or your equals in creation.” There is also an invitation from Jesus to look up to those who are aiding people being “othered” in The Good Samaritan. Among the more contemporary examples are the remarkable efforts on behalf of diverse religious groups such as those in Albania and Rwanda to protect lives of Jewish and Tutsi populations respectively during the Holocaust and Rwandan genocides. Ultimately, entire shared teachings of compassion and call for unity on the basis of shared humanity found in essentially all major religious texts of today are not nearly sufficiently addressed in mainstream literature and discussions on religion.

Aside from the aforementioned examples demonstrating closeness and mutual support amongst Abrahamic religions stretching two thousand years in the past, there is evidence of similar messages existing in polytheistic religions. For example, Viking and Slavic mythologies both had motifs of treating guests as family, be they strangers or not, which are ideals present with their respective variations in Abrahamic thought as well through examples from Abraham’s own life. A henotheistic example found in Mahabharata states: “How will the world run? If bitterness rewards bitterness, injury is returned for injury, hate for hate”, which clearly addresses the same notion monotheistic religions have of breaking the cycle of hatred and allowing space for goodness. There are, therefore, shared underlying motifs and messages throughout the world’s religious thought with variations mostly in customs and practice depending on their perspective establishment, expansion, and development, which in many ways only adds to the beauty and complexity of the world’s religious knowledge.

Given the often under-appreciated interconnectedness of worldwide religious beliefs through time and space, there is plenty of under-explored ground for interfaith work. When approaching interfaith work, it is highly beneficial, if not necessary, to be able to rely on the very core message of each respective religion and increase knowledge of these factual, yet ignored parallels. A careful look into these under-explored grounds would compel more religious leaders and members to engage in negotiations and interfaith workshops — ultimately leading to substantial future cooperation.

The views, thoughts, and opinions in this blog belong solely to the author and are not representative of an official position or endorsement by the International Center for Religion & Diplomacy (ICRD). 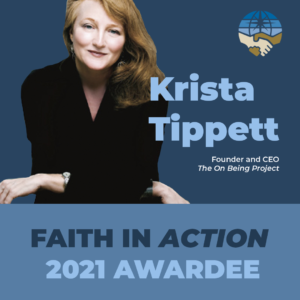