Few would argue against the fact that the people of the United States feel deeply divided. There is incredible pressure to “choose a side,” as though there are only “two Americas” that are opposite and incompatible. Debates about the direction of the country and its policies are real, but it is easy to see that people increasingly feel threatened and angry.

In the midst of that polarization, the space for meeting and conversing with one another has shrunk to a minimum. Media, public voices, and political figures seem to prefer to reinforce divisions, rather than seek to build bridges. Religious communities are not immune to this crisis. Faith, and the divine principles to which it appeals, can either move us toward mutual healing or mutual harm.

At the heart of ICRD’s work is faith that the best of religion should help identify and elevate shared values to solve common problems – across differences. Many of us appear to assume the “other side” wants the worst and is driven by selfish, stupid, or angry motives…but do we really understand what our fellow Americans think and feel? Are we open to hearing from one another and generating ideas and collaboration that works better for all Americans, rather than just “our side”?

ICRD is engaging faith leaders in the U.S. whose doctrines promote compassion and empathy, but whose communities are struggling with fear of and anger toward fellow Americans. ICRD will work with these faith leaders to explore the best way to open a dialogue, not to challenge political or social convictions, but rather to rehumanize those with whom we disagree, and turn the rising tide of vilification that risks erupting into violence.

If you agree that we have more in common than we think, and that we are stronger together than divided, then ICRD needs your help to bring this work to significant scale across the country, and to push back against the forces of division and self-destruction.

Please consider supporting our initiative through a contribution at http://spot.fund/9Mgwrzsc, and if you appreciate our efforts to bridge divisions and build community, please share this campaign! 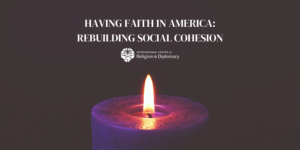